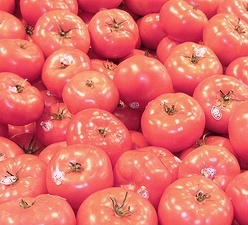 It appears the raisin handlers' luck in the recent U.S. Supreme Court decision Horne v. US Department of Agriculture has spawned a new federal takings challenge by another group of fruit growers.  This time it's a group of tomato growers asserting a takings challenge against the federal government, with a bit of a twist.  (And yes, I had to check, but both raisins and tomatoes are technically fruits -- see the things you learn?)

According to an article in the Packer, Tomato growers say eminent domain applies to 2008 crop, tomato growers are suing the federal government for $40 million in losses in 2008 when the Food and Drug Administration (FDA) erroneously blamed tomatoes for a salmonella outbreak later linked to hot peppers from Mexico.  The lawsuit was filed on July 29 in the U.S. Court of Federal Claims, in which growers from seven states are seeking class action status.  They want reimbursement for all U.S. tomato growers who suffered losses from the 2008 spring crop because warnings from the FDA cautioned consumers to not eat tomatoes from certain regions.

While I sympathize with the tomato growers for getting a bad wrap on the cause of the salmonella outbreak, I'm just not seeing the takings liability here.  It's part of the FDA's job to notify consumers of bacteria outbreaks.  Did they get it wrong here?  Apparently.  I just don't think it justifies liability under the Fifth Amendment's takings clause.  But that's what our court system is for, and everyone is entitled to their own opinion, right?  Tomato, Tamato....