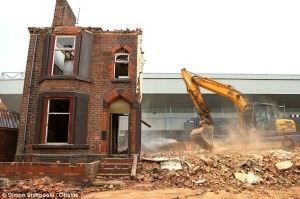 Redevelopment has quite the lengthy history in California.  Yet it has generally been "All Quiet on the Western Front" since redevelopment agencies were abolished in 2011 as part of Governor Brown's plan to fix the state's budget deficit.  Yes, the legislature breathed new life back into redevelopment last year through Community Revitalization and Investment Authorities (CRIAs), but a widespread return seemed unlikely given the safeguards and restrictions put in place -- particularly as to what can constitute "blight" (a term which previously could be interpreted so broadly to include nearly anything).  Yet as many predicted, that may have just been the first baby-step to gain approval and re-introduce the broader use of redevelopment in California.

So what's the current scoop?  Check out Assembly Bill 2492, which is currently circulating in the Legislature.  The bill's purpose is purportedly to address "unanswered questions about the data sources" that can be used to determine "blight."  But by tweaking the blight definition, could the bill open the door to the return of widespread use of redevelopment?

There's a fascinating article by Debra Saunders in the San Francisco Gate, Eminent domain means your home can be their castle, which walks through the history of redevelopment in Oakland -- starting back when Governor Brown was mayor.  The history gives some context to where we're at now, with AB2492 knocking on the doorstep of approval.  Ms. Saunders summarizes the bill as seeking "to expand redevelopment in the worst way."  She concludes that, in effect, AB2492 "would allow officials to find that an area is blighted if, for example, the median income there is less than 80 percent of the median income either 'statewide, countywide, or citywide.'"  As explained by Marko Mlikotin of the California Alliance to Protect Private Property Rights, the bill would allow local officials to cherry-pick the data and let affluent communities parade as needy.

In other words, if AB2492 is approved, Ms. Saunders concludes that local jurisdictions can pick the statistics that best suit their needs in order to find ways to use redevelopment.  For example, the most wealthy city in California could declare a portion of the city blighted and therefore subject to redevelopment if that portion does not meet 80-percent of the median income of the rest of the city -- even if that portion of the city is otherwise more affluent than the rest of the county or state.  Perhaps it allows blight to once again become subjective.

We'll continue to follow AB2492, and will report on whether it is ultimately approved.