Moratoriums Do Not Prohibit Billboard Relocations
By Bradford Kuhn on 01.14.2016
Posted in Court Decisions, Valuation 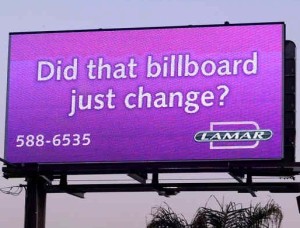 Because billboards are typically near public transit, they are routinely impacted by public projects such as street widenings, highway and freeway expansions, and grade separation projects.  When impacted, billboard companies may make claims for (i) the value of the billboard itself (fixtures and equipment), (ii) loss of business goodwill, and (iii) relocation expenses.  Usually the first two items can be addressed through a successful billboard relocation.  But when happens when a moratorium is in place prohibiting new billboards?  Does a moratorium on new billboards prohibit a relocation, thereby forcing the public agency to pay the billboard companies large goodwill claims?  The answer is that despite a billboard moratorium, a relocation may still take place, thereby limiting the agency's exposure.

(Bus & Prof. Code, § 5412.)  A recent unpublished case, City of Corona v. AMG Outdoor Advertising (2016 Cal.App. Unpub. Lexis 147), confirmed that when "the owner of a preban or grandfathered billboard either wants to move it or has to move it because it will be condemned by eminent domain, [the Outdoor Advertising Act and the local entity's municipal code] authorize the [local entity] to negotiate the terms of the relocation."

For public agencies constructing public projects that involve the displacement of billboards, don't just assume a relocation is not possible due to a billboard moratorium.  Check the local municipal code - it is likely that many have exceptions for relocation agreements.  And start working on a relocation agreement early and explore alternatives that can allow the billboard to obtain a new, viable relocation site, thereby minimizing exposure to large claims.