Whether the United States retained an implied reversionary interest in rights-of-way created by the General Railroad Right-of-Way Act of 1875 rights-of-way after the underlying lands were patented into private ownership.

Sound a bit confusing?  In fact, it is confusing.  So much so that when I started this post, I assumed I would quickly run through the background and history to set up the takings issue currently framed, explaining it all in simple, easy-to-understand language.  The problem is that I haven't been able to figure out any way to explain it in simple, easy-to-understand language.

So for now, here's the best I can do.  The 1942 decision in Great Northern Ry. Co. v. United States held that grants under the 1875 Act qualified as easements, not fee interests.  Thus, the federal government retained a fee interest in the underlying property.  At some point, the government sold off those fee interests, which remained subject to the easements created under the Act. 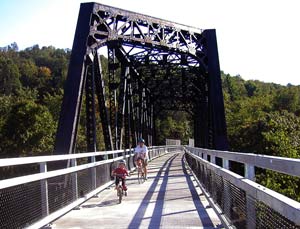 The question, then, is what happens when a right-of-way granted under the Act ceases being used as a railroad?  The underlying owners' view is that the easements are extinguished because they have been abandoned, and the underlying owners thereafter own an unencumbered fee interest.  The government's position is that when the railroad use ended, the easement reverted back to the government, which could then convert those rights-of-way to trails under the "rails-to-trails" program.

If the owners are right, the government must pay just compensation every time it wants to build one of these trails because it is essentially condemning a new easement from the fee owners.  If the government it right, it already possesses the right to build the trails under its reversionary interest, so it need not pay anything to the underlying owners.

If you followed along, you now have a pretty good sense of the issue raised in the Brandt case.  One other thing you should know is that while the Tenth Circuit Court of Appeal ruled in the government's favor in the Brandt case, other Federal Circuits have previously ruled exactly the opposite on the same issue.

At this point, I'm not about to try predicting an outcome on this one, but I do think this will be a major decision when the Court issues it -- probably sometime next spring.

If you want to read more:

Other than that, there hasn't been much written yet about the Supreme Court's decision to grant cert, but I'm sure that will change over the next few days.