Infrastructure projects take years to develop:  the environmental review, funding, design, procurement, and construction of a public project is time consuming in any state, but even more so in California given the strict regulations and oversight any public agency must comply with.  During that lengthy process, private properties situated in the proposed project alignment remain in a state of flux.  When those impacted properties are slated for development, what are the parties to do? 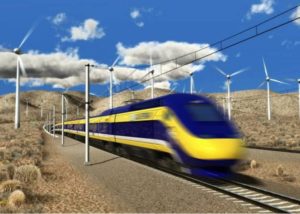 According to an article in the Morgan Hill Times, Council OKs new housing in one of two bullet-train paths, this situation is currently playing out in Morgan Hill, where a residential home builder is proposing to construct a subdivision which lies in the path of one of the proposed alignments for a public transit project.  Despite the potential future conflict, the City approved the developer's subdivision entitlements so building the residential units can commence.  Is this the right choice, or is there a better alternative?

On the one hand, there is no guarantee the public project will come to fruition, and the final alignment has not even been selected.  So it makes sense to allow the private development to go forward.  On the other hand, if the public project does proceed on this alignment, instead of acquiring vacant land the agency will now have to acquire a number of new residences and relocate impacted families at a much higher price.

Under California law, the City's decision to allow the residential development to proceed is likely the correct approach.  If the City refused to allow the owner to secure entitlements due to a potential conflict with the train alignment, the City would potentially be held liable for inverse condemnation.  We've recently seen this play out in the Jefferson Street Ventures case.  Such a situation may create liability before the public project's alignment is determined, or before project funding is even available.

However, what if, in order to minimize costs and impacts, the public agency decided to acquire the potentially impacted property now, before it was developed?  Unfortunately, this raises another host of issues, as the agency could eventually risk a challenge to its environmental approvals with someone claiming that the agency's purchase of the impacted property influenced the ultimate selection of the preferred project alternative.  Similarly, acquiring property before securing environmental approvals of the public project could jeopardize funding for the project from federal agencies.

In situations like these, there typically is not a great solution.  However, one potential opportunity that has been utilized more frequently, and that is allowed by a number of federal oversight agencies, is securing approvals to acquire potentially impacted property under a "protective acquisition" exception.  Such an approach allows a public agency to acquire impacted property before environmental approvals where the acquisition is necessary to prevent the imminent development of a parcel that is likely to be needed for the proposed public project.  If the agency can document that the developer has taken concrete steps to develop the property, and imminent development would conflict with the public project, such an early acquisition may be permissible.

In order to avoid tainting the environmental process and the consideration of project alternatives, protective acquisitions are only allowed under a limited number of circumstances, and the agency must comply with the Uniform Relocation Act and all other laws and regulations.  But it is definitely an approach that both public and private parties should consider exploring, and may even be one that creates a win-win solution.  Perhaps it could even benefit the situation currently taking place in Morgan Hill.