Who Has The Right To Develop A Pier?
By Benjamin Rubin on 09.09.2020
Posted in Court Decisions, Inverse Condemnation & Regulatory Takings 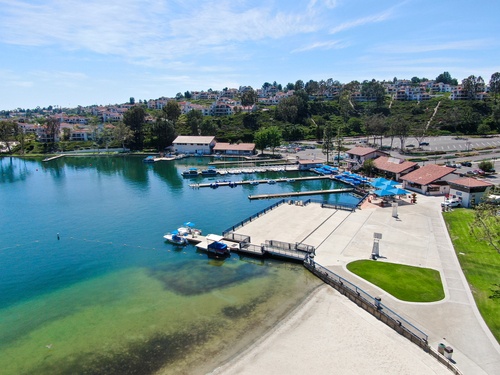 If you know someone with property that borders, is adjacent to, or abuts a natural lake, pond, bay, sea, or ocean, they may have littoral property rights. What that means is they may have the right to build a pier out to the line of navigability, a right to navigation, a right to accretion, and a right of access. I say “may” because these rights can be qualified rights, or simply nonexistent. Furthermore, determining whether such rights exist and, if you are lucky enough to have them, their extent can be a complicated endeavor. Then again, sometimes the analysis can be quite simple, such as when an eight-foot-wide city-owned public walkway is between a piece of property and the water body, precluding any finding that the property borders or abuts the water body.

In Riddle v. Vallely, although the court was faced with one of these relatively simple determinations, the history surrounding the claim goes all the way back to the 1930s. You see, it was then that the City of Newport Beach issued a permit to the Vallely family authorizing the construction of a pier, dock, and floats in a portion of the tidelands in Newport Bay. Thereafter the Vallely family, consistent with the permit, constructed a commercial pier in the tidelands that extended across the length of their property and the neighbor’s property. Notably, in between the properties and Newport Bay is an eight-foot-wide City-owned public walkway.

Approximately 60 years after the construction of the pier, Ms. Riddle purchased the neighboring property. Almost two decades later, after the death of a family member and complications associated with transferring the existing permit for the pier, the Vallely family entered into a lease with the City allowing the Vallely family to continue operating the pier on the tidelands in front of their property and Riddle’s property for a 50-year period.

Shortly thereafter Ms. Riddle filed an action in state court alleging a number of claims, including that the City’s approval of the lease resulted in a taking of her littoral rights to the tidelands fronting her property. The trial court rejected Ms. Riddle’s claims, and the Court of Appeal affirmed that ruling.

The Court of Appeal also rejected a claim of “equivalent” littoral rights based on the Newport Beach Municipal Code, explaining that under the Municipal Code Ms. Riddle merely has the right to apply for a pier permit, which the Harbor Commission may deny based upon its own discretionary determination.

Finally, the Court of Appeal explained that even if Ms. Riddle did have littoral rights, her takings claim would still fail, because those rights would be subservient to the City’s authority under the 1978 Beacon Bay Bill to create and regulate the public harbor. Through the Beacon Bay Bill the Legislature granted to the City all right, title, and interest in the tidelands and submerged lands, whether filled or unfilled, bordering upon or under the Pacific Ocean or Newport Bay that were within the City’s corporate limits as of July 25, 1919. Accordingly, as a result of the Beacon Bay Bill, any interest in submerged land or tidelands that Ms. Riddle even hypothetically had would be subject to termination by the City at will. The Court of Appeal concluded, therefore, that even if the lease terminated Ms. Riddle’s littoral rights, there could be no taking, since Ms. Riddle only had a qualified right at best, and the City had the absolute authority to terminate Ms. Riddle’s right at any time through any means.

While the Court of Appeal denied Ms. Riddle’s claim, she was arguably left in the same position as when she purchased the property. That is, the pier that has been in front of her property for more than half-a-century will continue to be so for the foreseeable future.