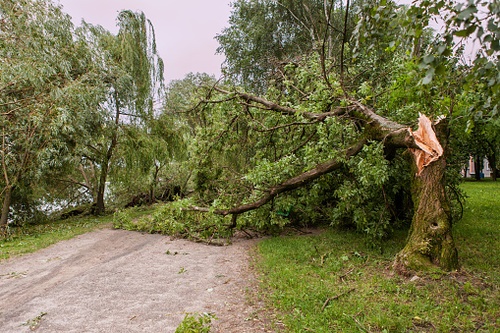 In 2011, the City of Pasadena experienced a storm that uprooted more than 2,000 City-owned trees.  During the storm, a large pine tree located on City property fell on a private residence, causing approximately $800,000 in damages.  After paying out insurance benefits, the homeowners' insurance company sued the City for inverse condemnation on the theory that the City owned the tree and maintained and cared for it.  While the City conceded it owned the tree and maintained it, there was no evidence of who originally planted the tree over 60 years ago.  The trial court held that the tree was a public improvement and the City was strictly liable for the property damage.

On appeal, the Court held that the tree was not a public improvement and the City was therefore not liable.  The Court explained that a "public project or improvement" is a "use which concerns the whole community or promotes the general interest in its relation to any legitimate object of government."  It went on to explain that a tree constitutes a work of public improvement for purposes of inverse condemnation liability if the tree is planted by or at the direction of the government entity as part of a planned project serving a public purpose, such as to enhance the appearance of a public road.  Despite the City's conceding that the tree was publicly owned and maintained, the Court found that there was no evidence of who planted the tree, and therefore no evidence it was planted it as part of a project serving a public purpose.

Pursuant to Mercury Casualty Co., a public agency cannot be held strictly liable for inverse condemnation unless the damage was caused by a public improvement that was deliberately designed and constructed to benefit the public.  For older improvements or smaller ones with no record of who constructed the improvement or why, this adds an additional hurdle for plaintiffs to demonstrate liability.  This is particularly important for damage caused by trees.

While the public agency may escape strict liability under an inverse condemnation cause of action under this narrow definition (and the accompanying exposure to attorneys' fees and costs), even where there is no evidence a tree was planted as part of a planned project or design serving a public purpose or use, an entity may still face liability for other claims, including dangerous condition of public property.