Sometimes a Taking is not a "Taking"
By Rick Rayl on 08.02.2013
Posted in Court Decisions, Inverse Condemnation & Regulatory Takings

As an eminent domain lawyer, I sometimes feel about takings claims like Justice Potter Stewart felt about obscenity:  I know it when I see it.  But every so often, a case comes along that reminds us that we might need to dig just a little bit deeper.

In TrinCo Investment Co. v. United States, No. 2012-5130 (July 18, 2013), it all starts out seeming so simple.  The government comes onto private property without permission, takes $6.6 million worth of timber without asking, and then wanders off without offering so much as a dime in just compensation.  Hard to miss this one:  it's an obvious taking. 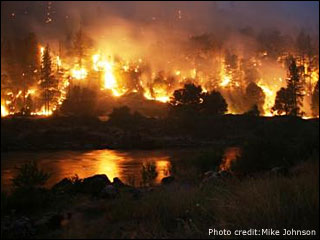 But when the property owner made the same argument, the Court of Federal Claims disagreed, concluding that no taking had occurred and the owner was out of luck.  How can that be?

Well, the court relied upon the "necessity" doctrine, which provides immunity for government takings that are "necessary."  In other words, just because the government took it doesn't necessarily mean that it's a "taking."  And in TrinCo, the taking wasn't a "taking" because the government burned the timber in an effort to fight a large wildfire, the "Iron Complex" fire, burning in the nearby Shasta-Trinity National Forest.

there is an imminent danger and an actual emergency giving rise to actual necessity.

In TrinCo, the Federal Circuit was not convinced the government's actions qualified for protection under the "necessity" doctrine.  It reversed the lower court's opinion, remanding the case for further proceedings to determine whether the government could meet the high, "imminent danger" and "actual emergency" standards.

For more on the case, see my E-Alert Sometimes a Taking is not a "Taking" and/or Robert Thomas' blog post, Invoking "Doctrine Of "Necessity" Does Not Automatically Absolve Forest Service For Taking Of Timber.  For more about the "Iron Complex" fire that created the background for the case, see Iron Alps Complex Wildland Fire, posted at California Fire News.